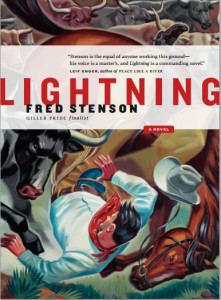 Lighting is the second of three historical novels by Fred Stenson, set in the 19th century west. After the fur trade (the subject of the first of these novels, The Trade) came the open range ranch era. In the wake of the destroyed buffalo herds lay a sea of grass, ungrazed. Great cattle herds were pushed north and west, stocking cattle frontier after cattle frontier. One of the very last of these was Alberta, Canada, where herds were introduced in 1881 and after to graze the buffalo grass east of the Rockies.

Texas-born cowboy Doc Windham is looking for next cowboy job in southern Montana when an Alberta ex-Mountie comes to town looking for cows. He and his friends hire on and head north. Doc’s life has been to move and to search. He found and lost the love of his life, and acquired an enemy who hunts him still. One more time, he tries for a frontier unpolluted by civilization.

Leif Enger, author of Peace Like a River, says of Lightning:

Fred Stenson writes as if the Western were new and himself its first practitioner. His cowboys do actual cowboy work; his lawmen and prostitutes seem not creatures of research but living souls plucked fresh out of memory. It is clear straightaway that Stenson is the equal of anyone working this ground—his voice is a master’s and Lightning is a commanding novel.”