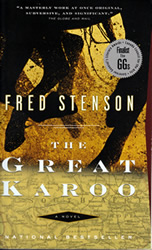 THE GREAT KAROO
Novel by Fred Stenson
Published by Doubleday Canada Ltd. in 2008

Finalist for the 2008 Governor General’s Award for Fiction

From award-winning author Fred Stenson comes a richly evocative new novel, at once brutal and tender, spare of language, and profoundly moving. From 1899 to 1902, the British army and soldiers sent from former colonies did battle against the farmer army of the white South Africans. Farmer in Afrikaans is Boer, and so it became known abroad as the Boer War. The Boer was said to be about democratic rights for non-South African workers, but it was really about the value of the Rand gold fields and the fear that this wealth might fall under the control of Germany.

In his novel, Fred Stenson follows the fortunes of a trio of western Canadian cowboys who have brought their own mounts to Africa in hopes of a horseback adventure. In the deceptively extreme landscape of the Great Karoo Desert and against an under-rated foe, Frank Adams and his friends find out about themselves: the dimensions of their fear and courage, the strength of their bonds of friendship and loyalty.

It is a brutal and merciless war as seen through the ant’s eye view of the common soldier.

“Stenson has produced another outstanding historical novel, a masterly work at once original, subversive and significant.” The Globe and Mail

“A truly magnificent novel by one of Canada’s greatest living writers.” David Adams Richards, author of Mercy Among the Children

“The Great Karoo offers illumination to both history and the human heart.”  Vancouver Sun