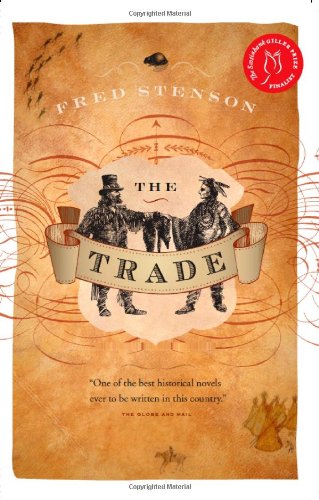 The Trade has been described as a Canadian classic, a historical novel that gets its arms around the 19th century fur trade in western Canada, and portrays the often dark lives behind the flowery myths.  The novel’s main characters are a mild mannered, rum-soaked trader with a catastrophic past, a ferocious chief factor cursed with a conscience, a tormented missionary who finds an existential nightmare beyond the edge of anything he know sas civilization, and a fur trader’s Metis son who has become a war chief of a still dangerous tribe and is the only one of them who can truly say he is at home. In the time of these lives, the Hudson’s Bay Company slides from the pinnacle of power down to mere anachronism, sweeping the lives of an entire frontier ahead of it.

The Trade won the inaugural Grant MacEwan’s Author Prize for Stenson in 2000. It also won the George Bugnet Novel Award from the Writers’ Guild of Alberta and the City of Edmonton Book Prize. It was a finalist for the Giller Prize, also in 2000.

“This chronicle powerfully conveys the harshness of life in a country dominated by ‘The Company.’ The Company is a monster that deforms all it touches… The novel is strong enough to alter forever the reader’s notion of this country—or a very large part of it.”  The Toronto Star